Soul Deep Recordings and Smooth N Groove are excited to announce the full lineup for the event on March 31st in Northampton!! Tickets are now on sale for the event, and they’ll surely sell out very quick. The host site, Club 43, is an intimate venue, with a limited capacity, so the vibes will be thick. We’ve been told that Northampton has never seen a lineup quite like this one, so make sure to save the date and hear what the deejays and emcees have in their arsenal. With so many great artists, with such immense talent, this will definitely be a memorable night. Don’t miss out!!

Big Bud is one of the true legends of the Drum & Bass scene. Not only had he released music on Good Looking Records, but his music was featured on LTJ Bukem's iconic Progression Sessions Series. Whether it's running a record label, producing, or deejaying, Big Bud has enjoyed success in every area of the D&B world. If you've heard any of his sets, then you know that this performance is one that you won't want to miss.

Conspire, a Shrewsbury based deejay and producer, has been featured on Skeleton Recordings, Soul Deep, Technique, and has an LP due out later this year on Smooth N Groove. He is no stranger to playing at live events and has supported some of the scenes best including Goldie, Randall, Calibre, and more recently Alix Perez, at one of the hugely popular Perception nights. With his hours of experience behind the decks, and distinctive production style, Conspire will surely bring his “A” game to the event.

Dave Owen is a New York based deejay and producer that has fast become one of the most sought after drum & bass producers in the United States. He has seen previous releases on Liquid V, Good looking, Soul Deep and MAC II, just to name just a few. Dave is also known for his amazing DJ sets and has played at drum & bass events across the world. We are truly blessed that he has taken time out of his busy schedule to join us. This will undoubtedly be a set not to be missed on the night.

Furney is another Drum & Bass pioneer that has created iconic music for the better part of 20 years. His music productions are well known from being hammered in the clubs by all of the top deejays in the world. He's had countless amounts of classic songs signed to Good Looking Records, some of which are still being searched for to complete elusive music collections. Furney is one of the top producers in the Drum & Bass game, who is known for playing epic deejay sets, playing mostly his own original music.

Madcap has been involved in the Drum & Bass scene for well over 20 years, and his musical genius is undeniable. His knowledge of the music and skills shine through in every song he produces and every set he throws down. He has a successful Radio Show, The Creative Wax Show, where his talents are on full display. On his show, Elliot flashes his ear for great music, his incredible mixing ability, and his flare for scratching records in a style all his own. Madcap is well known for dropping music on all of the most well known labels, such as Good Looking, Fokuz, Soul Deep, Smooth N Groove, Creative Wax, Mac II, Celsius, and many more.

Malaky has quickly risen to the top of the Drum & Bass production ladder and is backing it up with memorable deejay performances. Some of Malaky's early productions were snatched up quickly by Good Looking Records, Fokuz Recordings, Soul Deep, and many others. He continues to write music for Fokuz, and has recently had a song released on the Iconic, Integral Records. Malaky has enjoyed playing shows throughout Europe, and will now be featured on the lineup in Northampton!

mSdoS is a world class deejay that hails from the beautiful country of Greece. He will surely bring his signature musical fire to the dance floor in Northampton. mSdoS has made a name for himself in the scene from by producing classic tunes, running his record label, Liquid Drops, and playing memorable deejay sets in countries all around the world. If you haven't had a chance to see him drop a live set, then you don't know what you're missing.

Payback & A.K.A will be performing together, dropping fresh music that they've come to be known for. Payback is a well-known name throughout this niche genre of Drum & Bass. His sound is much sought after amongst headz, and his following has continued to grow steadily over the past few years. His production style is distinctive, and has seen him have various releases on labels such as Sheer Velocity, Exiled, Soul Deep, and Smooth N Groove. His track, “Skyline”, a collaboration alongside Conspire, has recently been receiving huge support from scene legend, LTJ Bukem. A.K.A is an accomplished producer who has a growing list of producers that are seeking to collaborate on musical projects. Over the years, he has continued to amass an impressive amount of works with some of the scene’s best including Blade, mSdoS, soulTec, Wyman, Payback, Greekboy, Radias, Soul Connection, and many more! The man also has impressive releases on both Soul Deep and Smooth N Groove, incorporating everything from liquid rollers to wicked amens.

Scott Allen will be making his UK Deejaying debut in Northampton. As the owner and operator of Soul Deep Recordings, Scott has become well known for his ability to release quality music that has created it's own niche in the D&B world. He has also produced big music that has landed on such labels as Soul Deep, Smooth N Groove, Good Looking and Fokuz, just to name few. We are looking forward to having Scott make his UK debut!

SoulStructure is a production duo comprised of brothers John & Dom Crossland. They have been receiving heavy support from some of the most influential D&B talents in the scene, since combining their passion for soulful, jazzy infused drum & bass back in mid 2012. They have been a highly sought after act and have seen releases on Influenza, Sonata, and an LP scheduled for release in 2018 on Jazzstick Recordings. With their fresh and individual take on the genre, we can’t wait to hear what they bring to Northampton.

Wyman is a Northampton based producer who will undoubtedly be looking forward to being featured on this amazing line up. He’s had previous releases on Soul Deep, and recently saw his ‘Difficult Truths’ LP released on Smooth N Groove. Wyman has also had releases featured on on Soul Bros, Funkstuff, Odyssey, and Liquid Drops. Make sure you don’t miss out on one of his very rare live sets, as he’s sure to have plenty of exclusives to drop.

MC PM, Longman, & Redeye are all accomplished emcees in their own right. Each lyricist brings their own flow and flavor to the mix, which will ensure that the vibes are thick at the show. We are blessed to have them perform!!

Keep up with all things Soul Deep by checking us out on the web at:

Keep up with all things Smooth N Groove by checking them out on the web at: 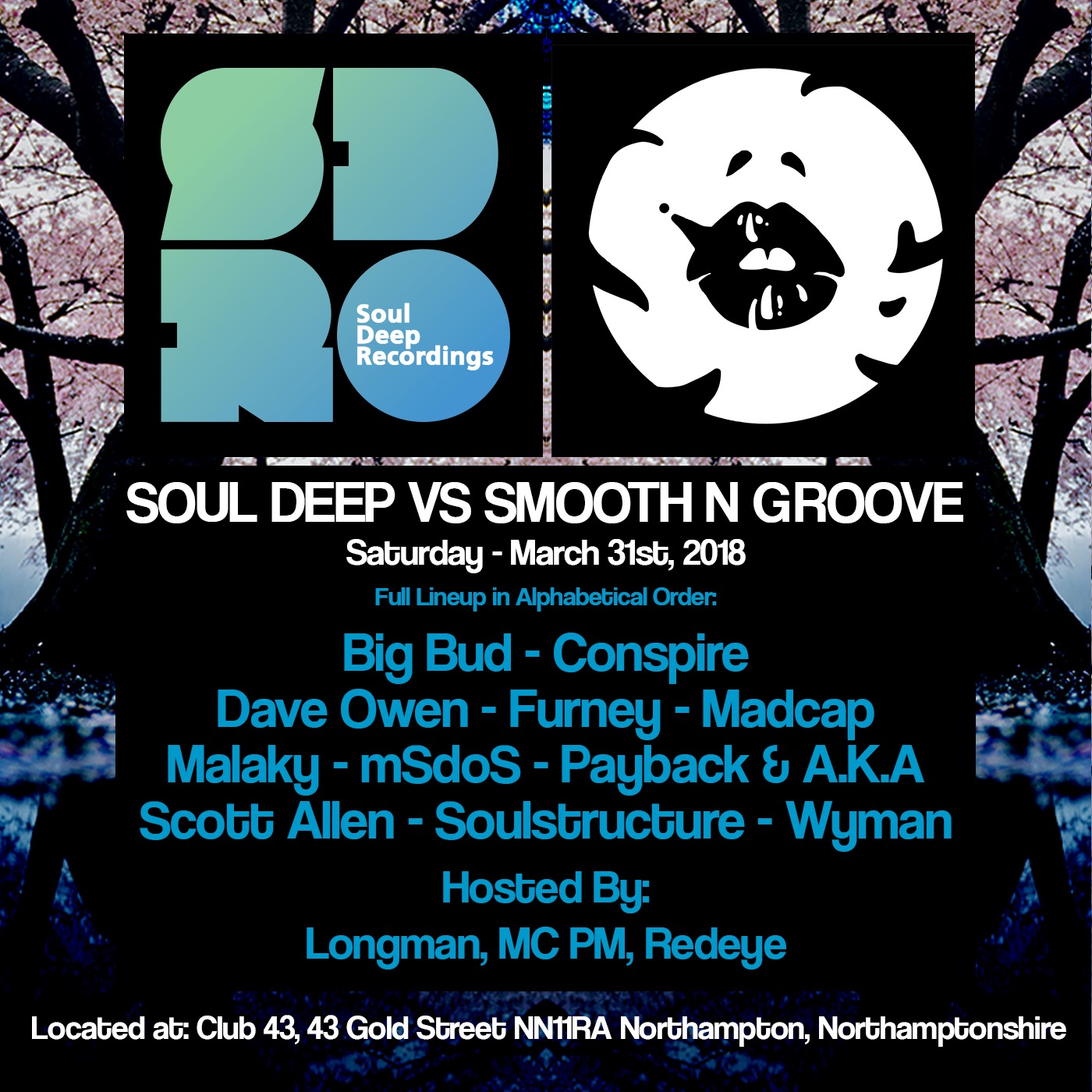